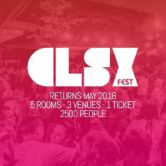 After two locked out events at Constellations in 2017 we return with a bigger and bolder party on Saturday 26th May 2018. The response to our first two parties was a suprise even to us and this year we have an even more impressive set of parties for you.

We take over the Constellations Terrace and Warehouse as we as the adjacent Hangar 34, we have also hired the road in between where we will throw a street party in association with one of the worlds biggest vodka brands.