A selection of mixes recorded live at the State Nightclub Liverpool

Lee Butler – The State – Liverpool (Would You Adam & Eve It) 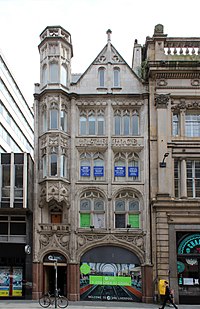 The building was constructed in 1906 to a design by Walter Aubrey Thomas, who also designed the Royal Liver Building and Tower Buildings. It was originally symmetrical about a central turret, but the half of the building, the part extending towards North John Street, was destroyed by bombing in the Second World War. The building continues to be used as offices, with a restaurant on the ground floor.

In the 1920s the downstairs of the building was used as a popular dance hall and venue. After the second World War it was closed and later reopened as a Debenhams department store. In the 1990s it transformed again into a popular night club and rave hot spot, using the open plan hall downstairs to set up a stage for live music, but later closed down again. It is now utilised only four times a year as a special event night club and rave venue which still holds the original marbled walls and gold painted ceiling.