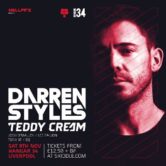 The promoters of Hellfire are pleased to announce they’ll be bringing Darren Styles to Liverpool’s Hangar 34 on Saturday 9th November 2019.

A DJ and Producer that’s never far from the forefront of the hard styles of electronic dance music, Darren Styles is clearly a true master of his art. Whether you’re watching one of his electrifying sets or listening to one of his ground-breaking productions, with over 25 years of experience under his belt, Darren has truly stood the test of time and continued to evolve as an artist that means as much today as when he first burst onto the scene.

From his early days in the UK rave scene, Darren Styles talent was clear from the outset. Responsible for anthems such as Pretty Green Eyes & Heart of Gold (with friend Paul Force under the ‘Force & Styles’ banner) and You’re Shining & Heartbeatz (with Mark Breeze as ‘Breeze & Styles’), Darren has featured in the UK Top 20 Singles Chart numerous times over the years. In 2008 Darren found solo success with the release of his debut album SkyDivin’, which entered the UK Album chart at number 4 and sold over a quarter of a million copies. His mix compilations have sold well over 1 million copies over the last 15 years.

Joining Darren Styles behind the Hellfire decks, we welcome Teddy Cream. Signed to Ministry of Sound, the Australian duo consisting of Vincent Calderone and Brandon Mangion describe their music as ‘hard hitting, energetic and uplifting’ – the perfect addition to a lineup with Darren Styles at the top of it. They have destroyed dance floors all over Australia and have now started making their mark in Europe, Asia & the United Kingdom. Teddy Cream have also graced well known festivals such as Creamfields (two years in a row), Ultra Europe, Chroma Festival Philippines, Good Life Festival, MTV Beats & Eats & more. Attendees can expect a combination of House Music and Melbourne Bounce during their set!

With support from some of the hottest up and coming local talent including Josh O’Malley, Lee Follon, Tony M & EQ, fans of the harder style of music are in for a white-knuckle musical ride on Saturday 9th November for the real ravers who like to go hard and fast all night long.
Tickets are on sale now with limited early bird tickets starting from just £12.50 + BF available atwww.skiddle.com

Tickets start from £12.50 available now at www.skiddle.com (Over 18s Only. ID Required) 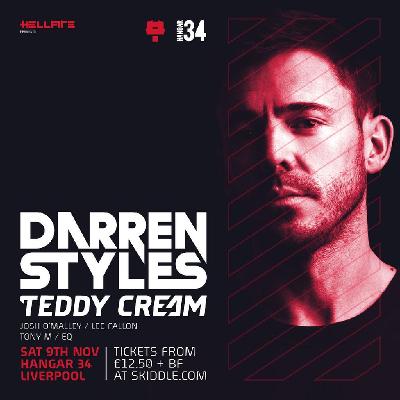