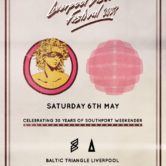 We can now announce that the first Liverpool Disco Festival of 2017 will take place on Saturday 6th May 2017 – this weekend may have a special meaning to some of you reading this. It is in fact, the 30th Anniversary of the legend that is The Southport Weekender.

Being the 30th Anniversary means that SUNcéBeat & Hustle will be teaming up to bring you not only all the best parts that made the first Liverpool Disco Festival so special, but adding some of the quality music that made Southport Weekender so special.