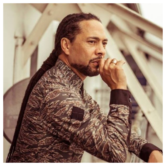 Roni Size’s whole life has been about building something new from whatever was around him. From Bristol youthclub parties, through the white heat of rave and the founding moments of jungle and drum’n’bass, to transforming underground electronic music into something that could be played by a live band on the biggest arena and festival stages, he has at each stage created completely afresh – not just a sound or style but an entire methodology of how music can be made. And each time, that new creation has reflected his heritage, his surroundings and the precise moment in which he’s operating.
LTJ Bukem

Just who is LTJ Bukem? Ground breaking DJ? Inspirational musician? Record label entrepreneur? Club visionary, perhaps? When the man behind those wire rimmed glasses and that disarming smile writes his job description just what does he put?

The man who took the drum and bass concept from a small venue off London’s Charing Cross Road to the nation’s superclubs and then onto the international stage? The geezer whose records launched breakbeat into a brand new galaxy of sound? Or maybe he just writes ‘Renaissance man for a digital age’.

In truth LTJ Bukem is all of the above. Although he wouldn’t like to admit it, LTJ Bukem is the living embodiment of the post-acid house entrepreneurial creative spirit. He is a mild mannered energy flash whose panoramic musical vision has found success in every area he has explored.

From running sound systems to cutting up breaks at raves, from relocating the heart of breakbeat culture to redefining the spirit of drum and bass, the man known to his friends as Danny Williamson has sat at the forefront of breakbeat evolution, lighting the way with little more than a zest for life and a love of music. In other words, LTJ Bukem is a man on a mission!