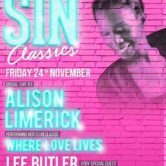 Alison Limerick live appearance. She is best known for her 90s club anthems with her most successful and best known track being Where Love Lives, which was originally a massive club success in 1991 and top ten smash when remixed in 1996. As part of her PA Alison will be singing “Where Love lives and Make It On My Own”